Echo is a simple audio recorder with instant playback. Now with optional echo voice effect. To make a recording just hold the record button, release it and hear it played back.

Once you’ve made a recording you can play it back as much as you’d like. Hit replay while a recording is already playing and it will be played again over the top. You can also record while playing, or play while recording. Sonic chaos is guaranteed.

Echo’s not just for fun, it’s designed to be the quickest and easiest way to hear yourself. It’s a mirror for sound: use it to practice speaking a foreign language, voice training, playing music, or giving a speech. Or just have fun recording your friends.

Best of all, Echo is completely ad-free, so you can use it without distraction. 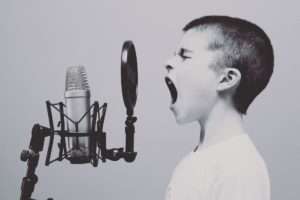 Please note:
* You can now save externally – this is available from the Recordings screen which you can access through the menu. (To save a recording to this screen, simply tap the blue star at the top of the screen after making the recording.)

* Recordings are saved as uncompressed audio – this means they have great sound quality, but the files can be large. (Technically, Echo records 16 bit, 44.1 KHz PCM mono audio – storing 1 minute of audio uses 5.29MB.)